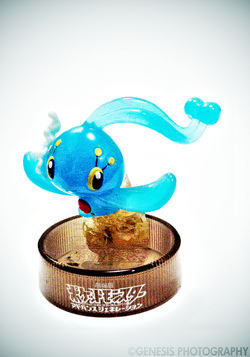 Manaphy is one of the first bottlecap figures in my collection alongside Plusle and Munchlax. It was found in a toy store near me. It was thrilling to know that there are more figures like the Pikachu bottlecap I found.


It is the only figure released for this set and is quite unique. It is completely different from its 10th Anniversary counterpart as it is of a different mold and is made of a clear material.